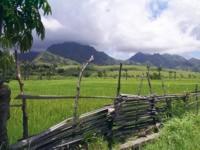 Indonesian Land Law is quite different indeed to the laws that apply in most Western or developed countries.  Foreigners wishing to use or purchase land for whatever purpose need to be aware of these differences and not assume that legal conventions that apply in their home countries necessarily apply in Indonesia.

Legal certainty in Indonesia has always been rather precarious, not least in the realm of land ownership.  However, secure land title for foreigners is possible if correct procedures are observed.

There are two important "phases" when discussing Indonesian land law, that is, the phase before September 1960, and the phase after this date.  Before September 1960 Indonesian land law comprised a mind-boggling cacophony of traditional adat law, Dutch colonial laws, Western civil law, and laws enacted by the Indonesian government from the time of independence in 1949 (proclamation of independence occurred on 17 August 1945).

The basis of modern Indonesian land law is Law Number 5 of 1960 (UU 5/1960), also referred to as UUPA (Undang-undang Pokok Agraria, or the Basic Agrarian Law Act). (An english translation of UU 5/1960 is available here.)

Despite the word "agraria" in the title, the UUPA not only regulates agricultural land, but all land; urban land, forests, rice lands, plantations, mines, and coastal waters including fisheries.

Dutch agrarian law tended to have the purpose of favouring the development of large capital interests, in particular Dutch capital interests of course.  However, independence brought a very different perspective to the way that land was viewed.  Article 33 section 3 of the Indonesian constitution was extremely influential in framing the basic assumptions of the new land law of 1960.  It states:

(The land, waters and natural wealth contained within them are controlled by the State dan shall be utilised to increase the prosperity of the People.)

This article of the constitution is clearly socialistic in nature, and fairly accurately reflects the popular views of the vast majority of the Indonesian population, both at the time of the framing of the constitution up until the present day.  Indonesians generally, and Javanese in particular, tend to be communalistic in their outlooks, in contrast to the more individualistic perspectives that dominate the thinking of Western and certain other industrialised nations.

Thus, the UUPA of September 1960 is viewed by Indonesian legal scholars as an expression and execution of the aspirations articulated in Article 33/3 of the Indonesian constitution.  As such, it is therefore impossible under the UUPA for foreign individuals or foreign legal entities to legally own or use land in Indonesia.

The Republic of Indonesia is by far the largest country in Southeast Asia, both in area and population.  It consists of 13,677 islands that cover 1,919,443 km2 of land along the equator between the Indian and Pacific oceans.  The islands of Indonesia, of which 6,044 are inhabited, spread out over about 5,300 km from east to west, and 2,100 km from north to south.  The country’s total land and sea area is more than 7.7 million km2 (3 million miles2). Despite the vast number of islands, five of them account for nearly 92% of the land area.

Indonesia is an archipelago; in fact, it is the largest archipelago on earth.  This has lead to the development of what is known as the "archipelagic concept" (wawasan nusantara) in which the nation known as Indonesia comprises not simply just islands of land, but also the area of sea between the islands.  Whereas other nations may refer to themselves as "motherland" or "fatherland", Indonesians refer to their country as "tanah-air", meaning "land and water."

Under international law, the waters between the islands of an archipelago have not traditionally been regarded as part of a country’s territory.  However, Indonesia (and other archipelagic states) has long claimed them as such.  The Law of the Sea Convention, approved by the United Nations in 1982, established the concept of archipelagic waters, supporting Indonesia’s claim.  As archipelagic states, countries need to establish their maritime jurisdictions, measured from archipelagic baselines: internal waters, archipelagic waters, territorial sea, contiguous zone, the 200-nm Exclusive Economic Zone (EEZ), and extended continental shelves.

Forms of land title regulated by the UUPA and issued by the National Land Board (BPN) include:

To foreign as well as domestic investors, the most important titles to be aware of are Freehold Title (Hak Milik), Cultivation Rights Title (HGU or Hak Guna Usaha), Building Use Title (UGB or Hak Guna Bangunan) and Right to Use Title (HP or Hak Pakai).

Freehold title is the strongest and fullest title that can be obtained.  However such rights are not absolute as the UUPA recognises the "social functions" of land, however infers a right of "peaceful occupation" of land by the titleholder.  Freehold title may only be held by Indonesian citizens (natural persons). It is therefore impossible for a foreign individual to have direct freehold ownership of land in Indonesia.

All Indonesian companies, no matter if they are PMA (foreign investment companies) or not, cannot possess freehold title over land and are compelled to use other titles such as Hak Guna Usaha and Hak Guna Bangunan.

According to the UUPA, land that is titled Hak Milik can be used as security for debt.  However, foreign companies and individuals must take care in accepting freehold land as security, and should consult with competent advisors beforehand.

The Land Cultivation Title (HGU) gives the right to use a state-owned land for the purpose of agriculture, in particular plantations, fishing or cattle-raising.  Such title is granted for periods of 25 or 35 years, and may be extended for another 25 years if the land is deemed to be managed and utilised properly.  This title of right is given to Indonesian citizens or legal entities (including PMA companies). A HGU title can be used as collateral, or, with the approval of the government, transferred to a third party.

A Building Rights Title (HGB) gives the right to construct and own buildings on a piece of land that someone else owns.  Such title is granted for a maximum period of 30 years, and can be extended for another 20 years.  HGB title is granted to Indonesian citizens or legal entities (including PMA companies), and can also be used as collateral or transferred to a third party.

The Right of Use on Land (HP) is the right to use land for any purpose for a period of 25 years.  This type of title should not be confused with a lease contract or sharecropping agreement.

Foreign residents of Indonesia and Indonesian legal entities (including PMA companies) may hold HP titles.  HP title has no collateral value to the owners and is not transferable.

A Land Title Deed is known in Indonesia as a Sertifikat Tanah, and is always accompanied by a Survey Certificate known as Surat Ukur that documents the location and dimensions of the land. 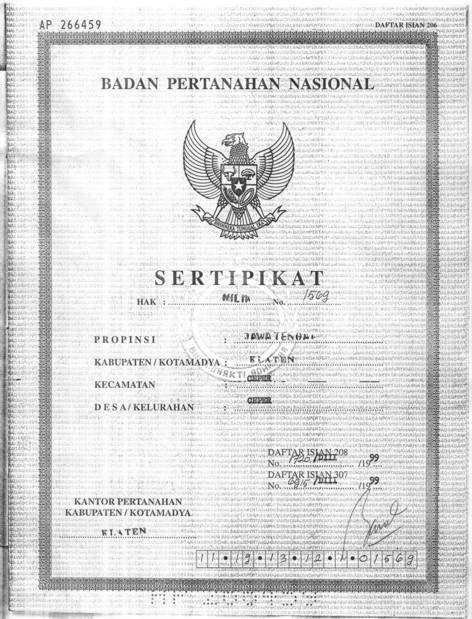 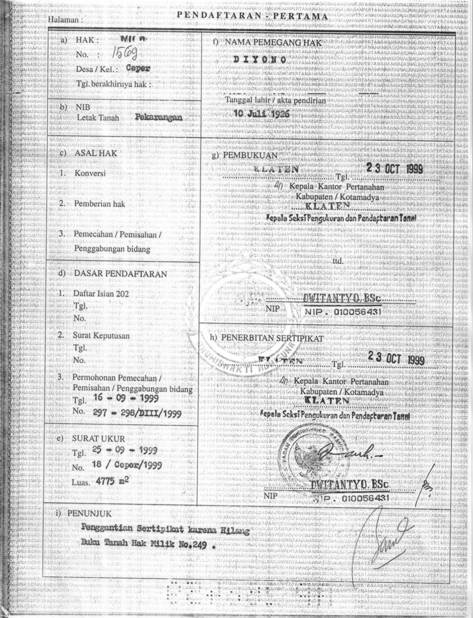 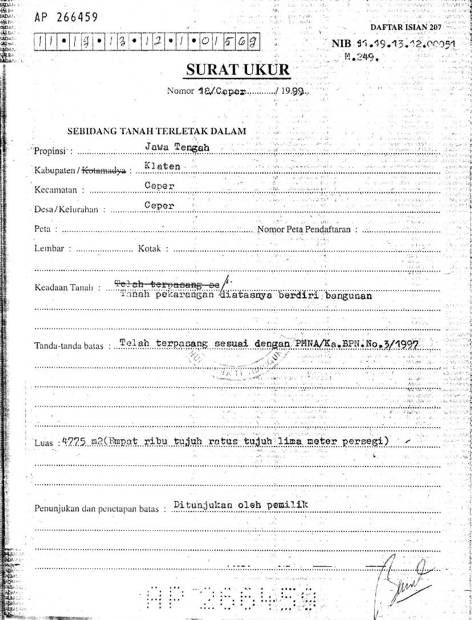 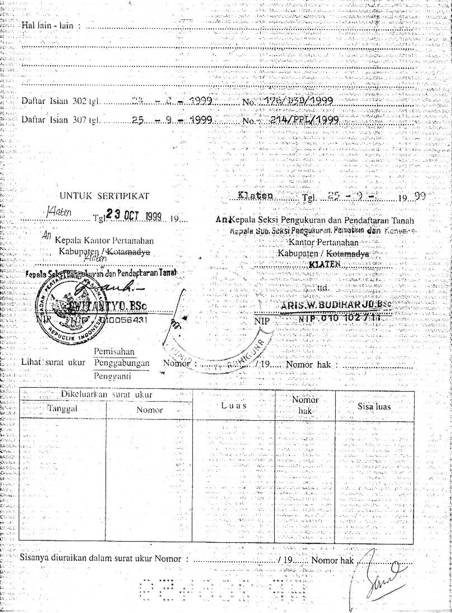 Land transfers and land title deeds are drafted by a Land Deed Official known as Pejabat Pembuat Akte Tanah or PPAT.  PPAT are very commonly also Notaries, and are easy to find even the smallest of towns in Indonesia.  Most of a PPAT’s work involves land transfers (in the case of sale or inheritance) and land registration.  Much are should be taken when selecting a PPAT to handle land matters, especially if the matter involves foreigners or PMA companies.  Unfortunately, the vast majority of Indonesian Notary’s who commonly handle land transfer procedures lack the knowledge and skill to properly advise foreigners on matters of secure land title, despite giving excellent impressions of seeming competence.

The vast majority of land in Indonesia is in fact not registered at the BPN and is held under traditional title (Hak Adat). Occasionally, provincial governments will carry out publicity campaigns urging people, especially those in non-urban areas, to survey and register their land.  However, this can be very problematic indeed, as lands are often "owned" by extended families who extent is difficult (and sometimes even dangerous!) to actually clearly define.  Serious family disputes can be triggered by the very suggestion.  Fortunately, most lands in areas of interest to foreigners and PMA companies will already have some form of clear land title.

How can a Foreigner legally obtain Indonesian land?

From the above discussion it is clear that foreigners are not permitted to have property title in Indonesia.  However, foreign individuals can legally acquire property in Indonesia and enjoy full beneficial rights.  This is done using one of two models: the first by a nominee arrangement, and the second, by way of an Indonesian incorporated company.

With nominee method, an Indonesian citizen or legal entity (including PMAs) is nominated to buy the land on behalf of the purchaser.  Land Title deeds will thus be under the name of the nominee.  The PPAT handling the land sale and transfer will simultaneously make a Power of Attorney giving the foreign purchaser total and exclusive authority to utilise, sell, transfer, or lease the land without any reference whatsoever from the nominee, along with a statement declaring that the money used the buy the land belongs to the foreign purchaser and not to the nominee.

It should be stressed that nominee agreements for land between Indonesian citizens and foreign persons are legally very weak, and will not hold up to legal challenge.  Thus despite all legal agreements, the beneficial owner is ultimately depending upon the goodwill of the nominee, and of the heirs to the estate of the nominee in the event that the nominee dies.

The only way for foreigners to secure Indonesian land is to establish an Indonesian company. 100% foreign equity companies (called PMAs) are now possible in Indonesia.  Such a company can then become the legal owner of the land, with the Title Deed in the name of the company. (To set up such a company, see Okusi Associates.)

Whist freehold title ("Hak Milik") is not possible with this method, the Building Rights Title ("HGB") has effectively the same strength as freehold title as long as the company continues to exist.  A foreigner or company cannot simply buy up land and then do nothing with it.  Indonesian land laws are designed to prevent speculation by absentee landlords who leave land idle for years at a time.

Obtaining land in Indonesia by foreigners is possible and secure as long as proper advice is sought from persons experienced in the area, and that proper due diligence is performed.  Not all PPAT or Notaries were created equal, and in fact the vast majority of PPAT are not competent to advise on such matters, despite being superficially qualified to do so.  Indonesian land law has some fundamental differences with land laws of Western jurisdictions, especially in regard to freehold title.  However, with an 100% foreign-owned PMA company, Indonesian property can be secured.